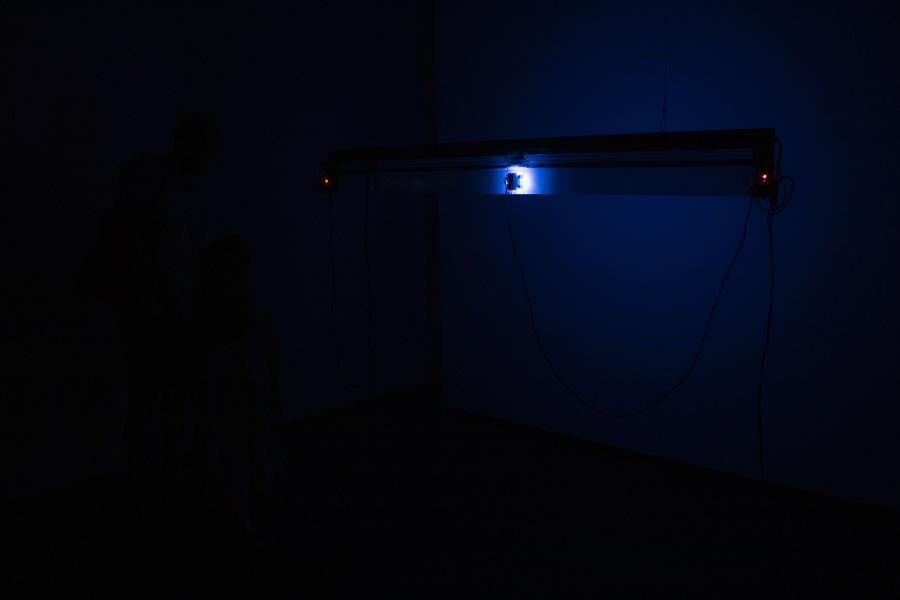 Christian Doeller (*1987) graduated in Photography and Media at Bielefeld University (Professor Suse Wiegand) and after that in Media Arts at Bauhaus University in Weimar (Professor Ursula Damm) in 2018. He was the first resident of Vašulka Kitchen Brno, Center for New Media Arts in 2019.

Christian Doeller's exhibition at the Vašulka Kitchen Brno presents an excerpt from the audiovisual work of a contemporary German artist who has been working in the field of technological image and scientific knowledge reaching out to philosophy for a long time.

The name of the exhibition ´Transcription´ represents a process in which real perceptions are transcribed through technological devices into visual evidence that records sensory experience in a specific way. Exploring empirical human perception compared to its digital or technological image, as well as their diffusion is an important motive for Doeller's works. But in this case, technology and devices are not an extension of human perception, as we understand them in the case of artificial intelligence, but rather a parallel offering the possibility to see reality differently, lying outside the sphere of human perception. They transcend the anthropocentric experience and expand our knowledge of the world, but at the same time, they falter our belief in capabilities and indefectibility of technology.

The mechanical and technological features of Doeller's instruments created from old components of printers, computers, and various appliances make an important contribution to the character of the resulting image. Just like the human body, devices are a technological body, a tool, and an interagent that co-determines the visual form of perception. Doeller exposes the body of the machine to reflect its importance in shaping the resulting image while also addressing the "defects" that occur in the digital and technological recording process and he transforms them into a changeable organic process.

The installation Luminograf#1 (2016) in the first room consists of three equivalent parts that show the process of recording light through technology.

The instrument Luminograf#1 was created by transforming a CD player into a device that works on the principle of a photographic enlarger. This device, combining digital input and analog recording, captures light on photosensitive paper while simultaneously transmitting a series of mechanical inaccuracies, unpredictable errors, noise and random processes that are caused by the inter-technology transfer.

The process of writing and recording the light source is mediated by a video in which a phosphorescent film is used instead of the photosensitive paper. The video allows for watching the recording through a moving visual presentation, revealing the recording progress between exact input and error. The resulting image takes the form of a large-format photo print showing the paths of the machine that have been inscribed on the paper during the process. However, abstract writing is the opposite of the exact machine input. Clusters of points and lines caused by a transmission error are much closer to the random processes of some physical principles and natural phenomena.

The installation is complemented by a projection of Steina Vašulka's experimental work, the Violin Power video sequence (1970–78), which is parallel to Doeller's investigation of the transmission of a real and electronic image. The work is a study of the relationship between music and image, between real and electronic recording. Steina's violin becomes an image-generating tool recorded by the rutt/etra processor. The video combines sounds, movement, and vibration of playing violin with the picture into a single common signal, offering a new opportunity to perceive both senses as one single perception. Instrument playing causes the actual image to decompose into the electronic, but also to skip between the two visuals. 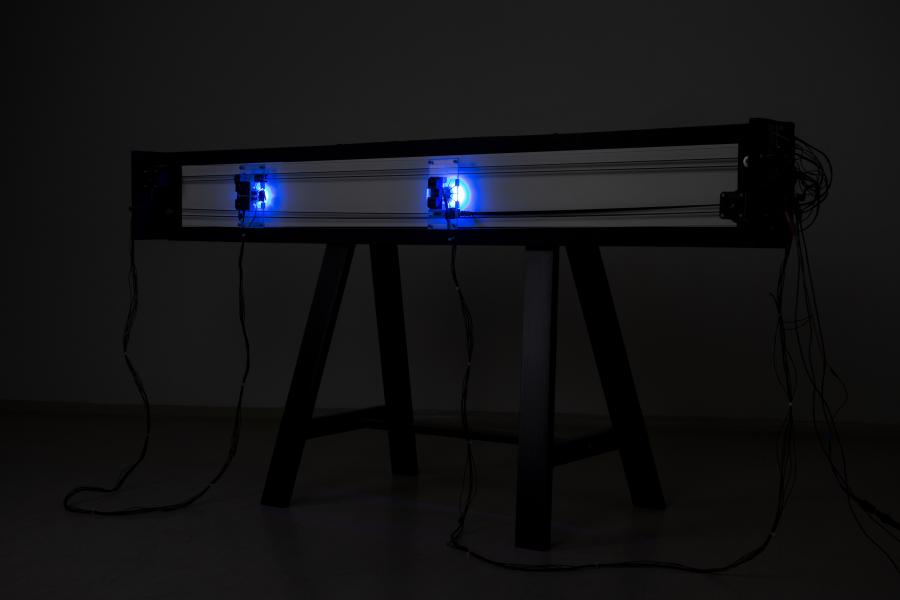 Slit Mirror Pong (2019) is Doeller's latest audiovisual work created during a residency in Brno. A specially designed instrument reacts to human movement in space and transforms its presence through a technological process. The device consists of a rectangular frame in which two modules move along a linear path, equipped with a light source and a distance sensor. The moment the two modules meet on their track, they emit a powerful light flash that illuminates the surface covered with phosphorescent ink. This effect lasts a few minutes for the ink to definitely flame out. The modules light up when they meet each other on their path or if the sensors detect the presence and movement of a person in the room. The distance between humans and modules affects the intensity of their light flash, but also the speed at which they move. Thus, programmed and random processes meet in work as well as technology and the human body that interact with each other. Unpredictable changes and changing situations transform the original program and show the coordinates of this process on the temporary inscription of the light effect on the glass panel. Instrument modules are transformed into living entities that continue their program, but also respond to changing conditions and surroundings.